This is Amazon’s second attempt at replacing the Funko Subscription Box, Marvel Collector Crops and after the last box I was almost sure that this would be my last even though I was a loyal subscriber since mid-year one of the original Funko subscription service. Now I will say that they stepped up their game on this box as opposed to the Deadpool box from a few months ago.

Now before I start the unboxing, I do not have a huge knowledge base when it comes to Venom, I understand who he is as a character and I know they are pushing this because the movie just came out. I have not seen it and I don’t know if I will to be honest. The last Marvel movie that saw was Avengers: Infinity War and that was in May so I am two or three movies behind in the Marvel Cinematic Universe or the Marvel tie in films. This box was all Venom themed so I was not expecting any different and I am basing my review off the box itself not the character it represented.

This box was for sure different than the last one, it was smaller and more compact and I went into it with an open mind because I didn’t want to be disappointed because I had expectations on it like I did with the previous box. Amazon is finding its feet with this box and I am happy to say it was a lot better than the first one. (After reading reviews of the Deadpool box on Amazon it seemed like a lot of people agreed with me about the box and its quality.)

On to what was actually in the box itself. I still miss the pin and the patch that you got with the first few years of the Collector Corps boxes. I also miss the comic book but that I will save for another day. This box unlike the last one at least had a listing of the items but again I still miss the product card that had the design inspiration and insights into the products but again, Amazon is finding their feet with this service.

Now there was something in this box that I have never seen in one of these boxes before and that was rather exciting because it was a break from the normal box format that I have come to expect and that was a car decal of Venom in silhouette. Now all of the windows of my car are tinted so there is a good chance that I will not be putting it on my car but I know people who would love it so someone is getting this little decal.

Of course there was a Pop! Involved because if there wasn’t I think that I along with many other collectors would question it. This month was a leaping Venom Pop! It is actually a really cool Pop! The detail on it is pretty great, tongue out and everything. I really liked all of the Pops! That came out for this film because it was the Venomized versions of some of the Marvel characters and they were all kind of great.

This was another item that broke away from the normalcy of the box itself and that was a squishy Venom stress toy, it’s great I was really happy to get that because sometimes you just need a stress ball that doesn’t form back right away. The last stress toy they had was in the Hulk box last December I think but that was a traditional stress toy that wasn’t the squishy texture that the Venom one is.

Two more items in the box and they were pretty great, first let’s talk about the tee-shirt, now in the Deadpool box there was no wearable item which was odd for this service, in this box however there was a tee-shirt. (I think in the November box there isn’t going to be a wearable either but I am unsure.) It is just about the same quality as the shirts were from the original subscription service so I was happy to see that as well. I actually really like the shirt because it is simple but different from those tee-shirts of boxes pervious. 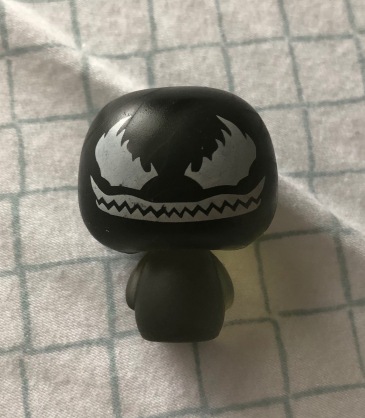 Last item, a tiny pint sized hero, which you can’t tell by the picture but it is slightly translucent, it is also so cute; which is an odd word choice when it comes to Venom but this pint sized hero, like most pint sized heroes are meant to be really cute. I have a Red Skull one from one of the boxes last year, it was the Superhero Showdowns box from I think February of 2017 (I don’t remember) and it was also cute. They take these character who aren’t supposed to be “cute” and make them real cute.

Overall, this box was a lot better than the Deadpool box and I am pleased to say that the next theme has been revealed to be 10 Years of Marvel and I am super excited for it. I was glad to see an improved box from the box previous and I will continue to subscribe because it is something that I enjoy.

Did you get the box? Do you have thoughts on it? Share them in the comments below!

Tell me you are in education without telling me you are in education. AMI day today so I’m working while my kiddos work. What you can’t see is my work computer, my regular computer, and all the coffee my body can handle.
Okay, I love these two so much. Most of my feed is them, but that’s fine.
Birds acquired.
Today was bittersweet. Today I said good bye to my motley crew, my ducklings, my fifth graders, and I will miss every one of them. Today was the last day of our school year and this year has been a rollercoaster. I didn’t get my class until January, I don’t know if I will have a full class in the fall or if I will just be doing what I was doing before. It’s okay, what is meant for you will not pass you. Teaching is hard, it’s hard every day but so worth it and rewarding. What got me almost to tears this afternoon was saying for the last time “alright, bus riders get in my line.” That was the thing that broke me and man, while some of those kids were a challenge, I will miss them.
I mean, I only posted one picture from my last hike. Figured another one would be just as good because we are planning a new hike soon. Get you friends who don’t leave you stranded in the woods. Well at least one who didn’t leave me behind, the other might actually leave me in the woods. I like being out of doors, just a little peril. Always up for an adventure. #nature #outdoors #waterfall #chasingwaterfalls
Six mile hike today, I might be dead but these views. It’s what happens when work friends become real friends and you hope they don’t judge you in the morning for nearly dying more than once. I need to be more of an outdoor human living in the Natural State anyway. Also the views totally worth it. #nature #hiking #waterfall #outdoors
Loading Comments...
%d bloggers like this: